Ask any child of the 70’s about the programme Rainbow and they will probably smile and look all nostalgic. As with any children’s Television programme as soon as you look back on it in the cold light of adult lives you begin to slightly question the sanity of the people in it, the writers and also yourself for watching it. Launched in September 1972 the show was beamed directly via ITV into Living rooms in London, Bedrooms in Barnsley or Conservatories Evesham. In fact, viewing the show in a nice new conservatory might be a good option. Try https://www.firmfix.co.uk/conservatories/ for some ideas.

The first thing that was presented to the viewer was the explosion of colour, as you would expect from a programme called Rainbow but also the theme tune stuck in your head, which again was the intention. “Up above the streets and houses Rainbow flying high, everyone can see it climbing over the sky”, I don’t even need to use Lyric finder for that, it’s all from memory.  After that the singers exhort the listeners to paint the whole world with a Rainbow. It’s certainly a heady mix to start a show that is aimed at improving the maths and English skills of the under 5’s. I remember a classic lunchtime combination was when it came on after that other classic Jamie and the Magic Torch. Fun though Camberwick Green and Bagpuss were they seemed very pedestrian compared to this “in your face” riot of colour and song.

What actually happened in Rainbow? This is where things began to turn unusual. First you were greeted with a series of the most warm and friendly set of “Halllo!” ever witnessed on British television. The fact this was delivered by a 6-foot bear (Bungle), a very pink Hippo (George) and some weird orange creature (Zippy) only exacerbated the feeling that the normal world was going to be suspended for some time. That the Hippo and Orange thing only had one arm (the other working the head controls) made that worse too. And then there was Geoffrey. The benevolent leader of the group and a man with the patience and staying power of a latter-day saint. It was his role to keep order in the house as the Hippo, Bear and Orange thing made war with each other in the constant sibling battle of who can moan the most, something that all parents could relate to. Perhaps the fact the 3 of them all slept together in the same bed, Geoffrey had his own room, which I’m sure he counted as a massive blessing, did not help the living arrangements. 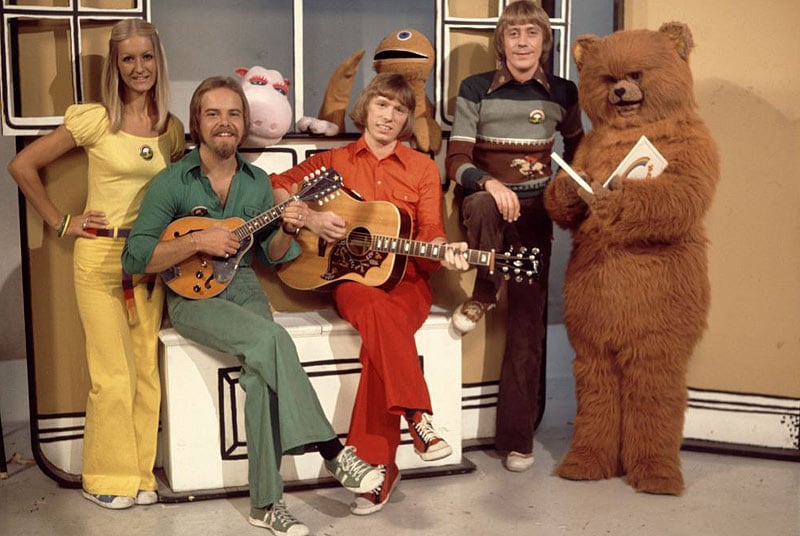 When the bickering over the use of glue had reached a fever point, a Cosgrove-Hall cartoon would come on usually of a crow being drawn and then coloured in. If they didn’t work then Rod, Jane and Freddy would thunder through a musical number about a job the children might consider cool. Rod, a Fireman climbing a ladder, Jane a Policewomen, directing traffic for choreography sake and Freddy a builder, putting sand into a cement mixer.  We then cut back to the gang whose differences are now resolved and Geoffrey suggesting we might try making something that the 3 had mangled together in the show later on that day with our Mum. Thus, was a generation inspired.